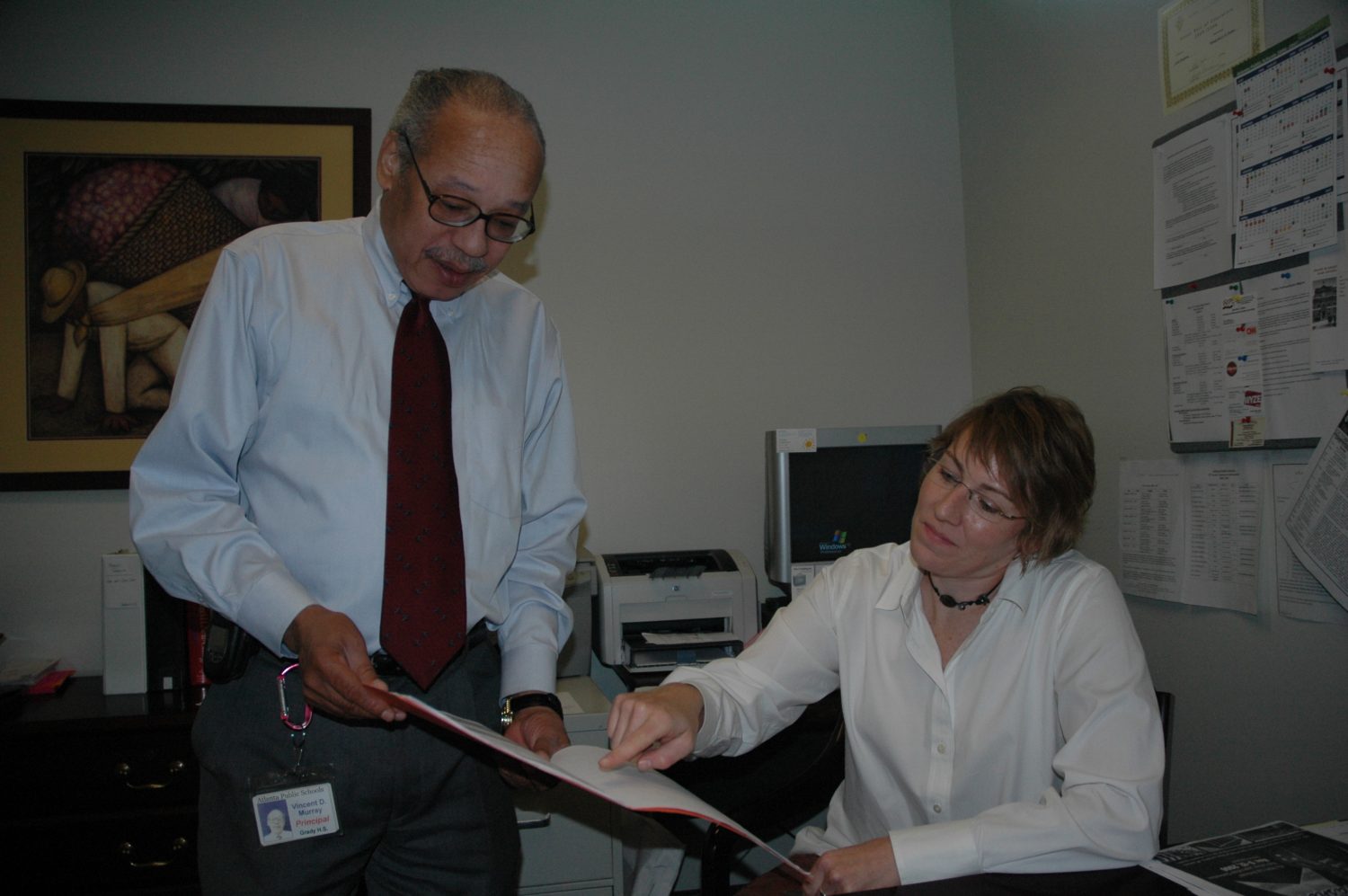 Vincent Murray, Grady’s principal since 1991, was told he was going to be reassigned at the end of the year on Friday, Feb. 21, a move which precipitated a large negative response against Superintendent Erroll Davis, who makes personnel decisions. Six other principals are reportedly being removed as well. Davis made the switches just weeks before his scheduled exit; the Superintendent Search Committee is wrapping up its hunt for a new system leader.

District 3 APS school board member Matt Westmoreland said that principal evaluations are done over a period of many months, and the decision to seek new leadership is made by a group of people, including Davis, regional directors, associate superintendents, deputy superintendents and human resource officers.

The community response has been largely supportive of Murray. Many of Murray’s advocates appealed personally to Westmoreland, a 2006 Grady graduate. Despite these concerns, Westmoreland decided to stand by Davis’s decision.

“I joined my colleagues on the board in respecting the administration’s decision in making all administrative decisions, including those around all school leadership,” Westmoreland said.

At the APS board meeting on March 3, dozens spoke during the community input session. A vast majority asked the board to not allow the large-scale principal changes proposed by Davis. Two of the over 30 speakers, both affiliated with Washington High School, spoke in favor of Davis’s decisions, applauding his removal of Washington’s principal.

After the board heard the speakers and deliberated in executive session, District 8 Representative Cynthia Briscoe Brown reported that the board would not limit Davis’s power to remove principals, and that principal Vincent Murray would be leaving Grady at the end of June.

In response to those who wished for the board to limit Davis’s hiring power, Westmoreland said the board does not have that authority.

“The board is a policy making body, and the only person we hire is the Superintendent, and then the Superintendent is either responsible for hiring, or hiring people that hire, the other 5,500 employees,” Westmoreland said. “The board has never and does not have a role in making personnel decisions, including who’s going to run schools and who’s not going to run schools.”

Many members of the Grady community advocated for Murray, and for changes to be made on an individual basis, as opposed to a widespread changing of the guard.

There were several common arguments made by speakers throughout the meeting. Many said that as widespread a change as the one set forth by Davis seemed arbitrary and unnecessary, and based on no grounded reason. Several also said it didn’t make sense for Davis, who will not be superintendent much longer, to make this decision, and that the new superintendent should make the final call.

Dealing specifically with Grady, many spoke positively of Murray’s leadership, some telling personal stories of interactions with him. Also, many worried that a change in leadership a year before SACS’ review of Grady would put the school at risk of losing accreditation.

Speech and debate teacher Mario Herrera was one of several teachers who spoke.

Government teacher James Campbell highlighted statistics showing that Grady has the highest graduation rate for economically disadvantaged students of any school in APS. He attributes much of Grady’s success to Murray.

Campbell said that, by advising a homeroom of students who were held back a grade, Murray  personally inspired him and sent the staff two messages.

“First, every student in our school is important,” Campbell said. “Second, we should not be afraid to be innovative with students who are [in danger of] falling through the cracks.”

Senior Zoe Schneider, one of several Grady students who spoke, argued that the proposed changes were an overreaction.

“These vast, sweeping changes aren’t the solution to this,” Schneider said. “The solution to that is meeting with principals on an individual level and perhaps changing out one or two principals if you really deem that necessary, not replacing seven principals at once.”

Grady alumnus Kenny Cochran also defended Murray, and said a change in leadership should not be made solely for change’s sake.

“Why Dr. Murray?” he said. “Your answer: tabula rasa, blank slate. But what are you wiping clean? Are you forgetting about the other details that matter on the slate? … Is new better than the impeccable experience and track record of a true leader?”

Eighth-grader Elizabeth Lansing asked the board to retain Murray, saying she has lacked stability in her education due to the constant interchange of principals.

After listing the principals she has had, she said, “That’s six principals for me, and seven for my friends who went to [Springdale Park]. Remember, we’re only in eighth grade … Let our class start ninth grade with Dr. Murray, someone our community knows, values, trusts and respects. The class of 2018 needs stability. Grady needs stability.”

Lansing also suggested the new superintendent choose whether to retain the principals, a proposal which drew raucous cheers from the crowded room.

Westmoreland responded to the concern that Davis, a lame-duck superintendent, should not be allowed to change school leadership.

“Superintendent Davis is the superintendent until he finishes his term in office,” Westmoreland said. “But I hear those concerns and am hopeful that the incoming superintendent can play as much of a role as possible in any major decisions that happen in the next several months.”

Grady and Inman parent Duggan Lansing said that this issue was a chance for the board to earn its constituents’ trust.

“We need to be able to trust you,” she said. “I trust that you will recognize the danger of removing a large number of principals as Superintendent Davis has initiated.”

Though supporters of Murray have been the most outspoken, there are those who stand in support of Davis’s controversial decision. An open records request for emails about the principal switches filed by The Southerner revealed several emails by Grady parents sent to Davis expressing approval of his actions.

Two Grady parents who asked that their names be withheld sent an email to Davis to say they are in “full support” of his actions.

“We applaud Dr. Murray’s years of service to Grady High School and sincerely wish him the best in his future endeavors,” the email reads. “Nonetheless, we believe that Grady needs a visionary, committed leader to challenge and engage the faculty, students and community … We are concerned that the current lack of strong leadership is jeopardizing the ability of Grady High School to build on its past successes.”

APS reportedly told a total of seven principals they are being removed, including Mays High School principal Tyronne Smith and Morris Brandon Elementary School principal Karen Evans. A large-scale student walkout followed the announcement that Smith would be removed from Mays.

In a community letter, Evans wrote that the only given reason for the decision was that “the district is ‘moving in a new direction.’”

“At no time have any concerns about my performance or that of Brandon been communicated to me by superiors or anyone else in the district,” Evans wrote.

Davis denied that the language “moving in a new direction” was ever used.

In a March 3 email obtained through the open records request filed by The Southerner, Davis wrote, “No such message was conveyed to the principals and no new direction is being contemplated by the system.”